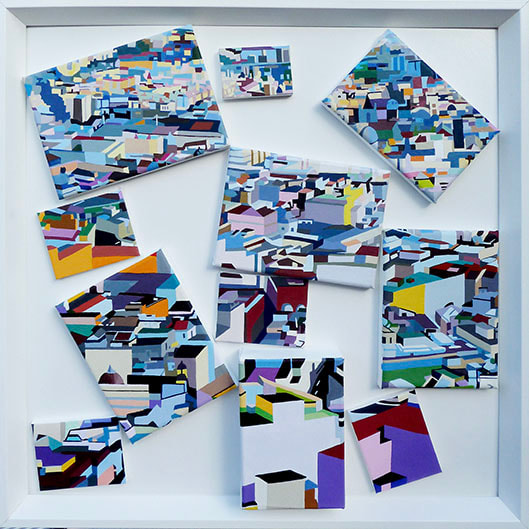 So, Cacophony lives again in a fourth version following on from “Cacophony” 2015, “Cacophony – Once Removed” 2018 and “Cacophony Divided” 2019. No longer reliant on original source material, this series has become abstractions of itself while still being a view of Naples.

Each canvas was worked on individually after having been composed as a complete image on the computer. It was once all the elements were screwed down to the backing board that I realised I needed further work for cohesion. I revisited the verticality of some of the shapes at this point. Some canvases were just off square, which meant it was very difficult not to be certain of the true shapes to use. Once the canvases were in their final positions, this really stood out to me and I reworked some of the shapes specifically the bottom canvases and also where adjacent shapes were tonally quite different.

During assembly, a further idea for Cacophony presented itself. So, watch out for a fifth version in the not too distant future.