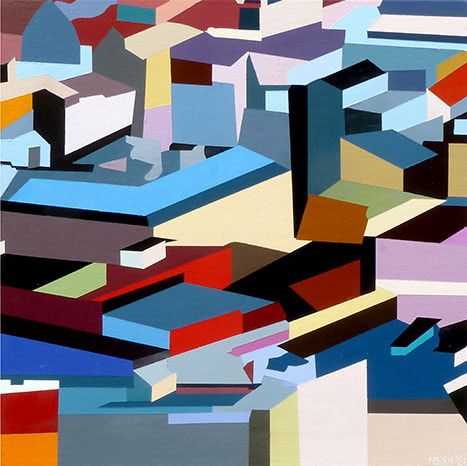 This painting was first conceived back at my last solo show. It was based on a conversation with Kate Townesend (wife of fellow Eagle Gallery Artist Mike Townesend) when she drew my attention to a specific part of the painting “Cacophony Divided”. Indeed, for a while I wanted to call the piece “Based on a conversation with Kate Townesend” – rather riffing off the credit in the original “Spitting Image” television series “based on a lunch with Martin Lambie-Nairn”. In the final reckoning however “Cacophony Kate” won through for its succinctness itself riffing off “Calamity Jane” perhaps.

This painting was another interpretation of my Naples cityscape abstract series. In that instance, I’d painted the image over a series of sixteen ten-centimetre square canvases all mounted spaced slightly apart in a single frame creating a view through a window perhaps. Even though I’d worked on each individually, I’d never really considered each canvas as having solo merit. It was Kate who pointed out the second panel in from the left in the second row as being of interest. It was here the idea formed to repaint this panel much bigger – and that is basically what I’ve done.

There’s something appealing about relinquishing the responsibility of control of one’s work – something I explored with the yellow flower series too. There’s almost a built-in excuse in this process: in the event of someone not liking it I can say “nothing to do with me mate, – that’s the fault of fate!”

I was after a crisp look, so I ventured into the wonderful world of varnishing. Using a gloss varnish would also deepen the colours. Alas on my first attempt I didn’t allow enough curing time and I managed to ruin it. Several You-Tube videos and extensive repainting later I final achieved an adequate effect. This one proved to be a steep