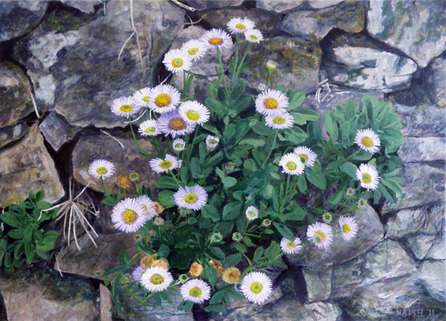 Having had a lovely stay in Derbyshire with my Uncle and his wife, I was overflowing with Garden photos following a trip out to Tissington. Nice sunshine and well looked after gardens, I knew that it would provide good source material for pictures for the next Luton Hoo walled garden exhibition. I was particularly on the look out for plants coming out of stone-walls to do a sequel to the previous year’s effort. I wasn’t to be disappointed either, and this painting was based on a photograph taken on that day. Walking out of Tissington, this was in a wall beside the road with a field beyond.

Don’t think I altered the image too much, though I think I deleted the numerous flys that were interested in the plant. Somehow they seemed to make it a bit messy. This is also a step up from last year in that I have discovered the “Rigger” Brush. This was following a course at the Earnley Centre (RIP) – thanks mum; sadly the one and only thing that I learnt from the weekend course. The brush enables the creation of more refined detail. I also felt the leaves needed more ‘drawing’ which had slightly been lacking the previous year. When I say “drawing”, I mean I used several different shades of green in the under painting stage rather than just one that I had used the previous year. So shapes were defined earlier and I think the finished result is an improvement on last year.

I finished this piece nice and early so was able to enter it in “Luton Art” too which I’m pleased to say it was accepted for.