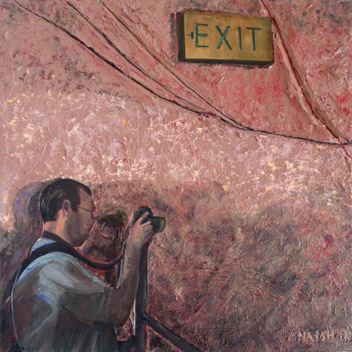 50cm x 50cm
Interactive Acrylic and modelling compound on deep edge canvas
2011
£250
Rejected from Hertford Open exhibition 2011
Exhibited at the Eagle Gallery “The Garden and Beyond” Andrew Naish one man show 12th – 19th October 2013
I’ve been meaning to do this one for a while. It’s from an iPhone photo inside the dis-used Odeon cinema in St. Albans. The cinema shut down in 1993 and has remained empty and unloved with the threat of demolition; but has been saved by James Hannaway. He plans a restoration akin to that he has undertook with the Rex in Berkhampstead. The Rex has been returned to a single screen showing recent films with a bar and comfy chairs in the stalls with conventional seating in the circle.

The finance has been achieved through a public share ownership and sponsorships. The plan is to finance the “Oddysey” (the new name for the St. Albans cinema) in a similar fashion, and to help spurn interest an open day was held. I joined many others in a wander around the inside to see clearance work achieved and see behind the scenes of the old building.

For me this was a dream come true, as an interest in dereliction and cinema this is an irresistible combination. I’ve followed some of the ‘urban explorer’ web sites and been fascinated by these buildings. Growing up I would visit the Barnet Odeon as a holiday treat. I am just old enough to remember the first sub-division into three screens. Generally, these divisions were architecturally speaking “Barstardisations” with the new spaces not quite making visual sense, but a great environment to hone my detective insticts detecting the revisions (and of course have a wider choice of films to see). Now with the commonality of the multiplex these old less accessable buildings are starting to disappear. These busy populated environments have become dark, quiet decaying spaces. Peel away the boarding and suspended ceilings may reveal old more ornate décor from a different age. Add to this roaming humans, and you start to get some weird imagery. Many had cameras as the man depicted in “The Wall” – recording the beautiful textures throughout and spaces that may have had a personal resonance from their pasts. This particular wall is the left hand wall of screen 3. Soon to dis-appear. This wall would have been erected when the cinema was sub-divided in 1973. It is indeed pink, I thought this was just my dodgy photography in poor light, but no, other photos verify this. The scaffolding that the man is resting his camera on forms a barrier at the entrance to the screen as much roofing in the far right hand corner near the screen has fallen in. The right hand wall which is under ground level was a bit flaky too. I think that the photographer was taking a shot of the screen.

Although the wall seems quite smooth, I chose to use texture to depict it – certainly appropriate to many of the surfaces in this building, especially side lit with the temporary lighting throughout. I’m not 100% why this image fascinated me so – I did have numerous examples with depth, interesting texture etc. I guess I’m just a sucker for a nice exit sign.

Weirdly my signature is actually integral to the composition – not sure if that is really the done thing; but one’s eye is supposed to bounce between the three elements – man, sign and signature. Used a lot of the texture agent to make the wall textured while masking the figure and the exit sign. Tried a bit of abstraction too with the hanging red wire and three shadows there of becoming ‘trenches’ in the gusto. There were these sorts of gaping wounds elsewhere so it dosent feel too out of place. Also reminds me of furrows/ clawed marks and even railway lines (another disused passion of mine) the only thing I loose in this method of depiction is the light draping quality of the wire; but this is about “The Wall” and I wanted the wall to have character – it’s lived – many films have flickered over this surface, many people have funnelled past , perhaps brushed against it on a exiting a popular movie, and latterly darkness and damp, and soon demolition. As the partition wall between screens 2 and 3 its days are numbered as the stalls area are returned to a single space. “The wall” has a lot to say; I hope that you agree.