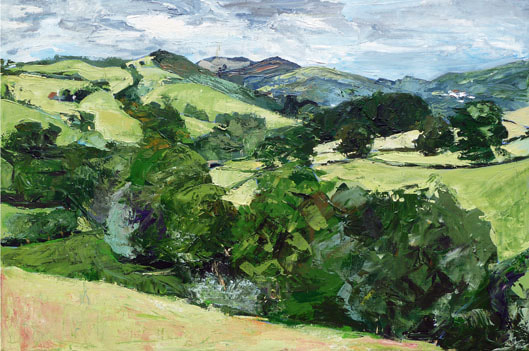 
This is the second piece of work completed on our week’s holiday to a Welsh cottage holiday let in June 2016. “Ginny Cottage” had some great surroundings and the view from the raised deck proved the inspiration for both the pieces that I completed.

I had come with four canvases for the week, guessing the two larger canvases might suit the main view depicted, I pre painted them one in Pacific blue the other in darker colours. The first one became the basis for this piece. There were a couple of other views that I felt could be undertaken, but I felt the need to use at least one of the pre-painted canvases that I had brought with me – and this view although already attempted (see painting 89) suited this canvas format the best.

I wanted to achieve a broader view in this one, so I sketched the view as before in pencil to work out a composition. I found this really tricky for some reason. My first sketch rather annoyingly ended up with the same view as painting 89. I had to begin again, and eventually I had a broader view that I could grid up to form the finished composition. With the day disappearing, I reconvened to the mezzanine lounge inside the property – where a small window gave me some indication of the landscape that I was attempting. I made a pass of colour on the canvas that evening which was predominantly based on the sketch. These block colours firmed up the composition and proved a good base for the more expressive layer the following day.

The following session was quite palette knife centric, and involved a lot of talking to myself to encourage the progression of the piece while clinging to the canvas as the breeze attempted to uplift my easel.

I am quite pleased with the results.

The Welsh language in the title adds some mystery and gives me the confidence that I can charge slightly more for the piece. I treated myself to a new frame supplier in Wendover. I find the white stained wood grain tray frames hard to find; but here a nice result was achieved.