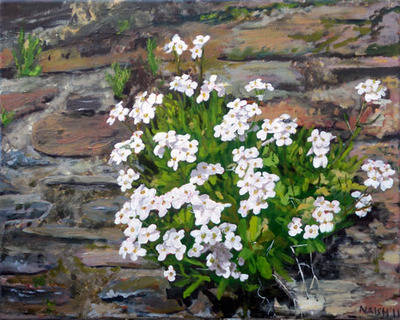 I’ve enjoyed painting walls since young and it provides a nice visual frame and background to a glorious bloom. On seeing such occurrences one often wonders how the plants manage to grow in such precarious locations. It is almost a form of visual raspberry blowing to the world. Good on ‘em I say.

I tried something a little different here as I under-painted the white blooms in bright red. Thought this might bring them forward and make them buzz a little, if small amounts peered around the subsequent white layer.