89. View along the Dee Valley 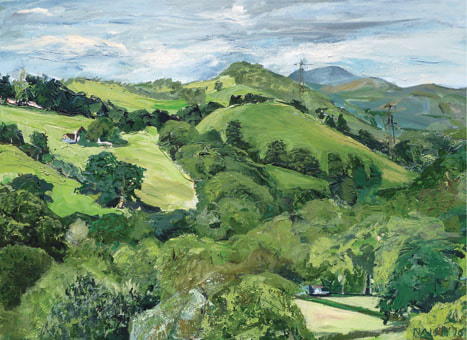 
This is the first piece of work completed on our week’s holiday to a Welsh cottage holiday let in June 2016. “Ginny Cottage” had some great surroundings and the view from the raised deck proved the inspiration for both the pieces that I completed.

I had come with four canvases for the week, guessing the two larger canvases might suit the main view depicted. One I had pre-painted in Pacific blue, while the other a mixture of darker colours. I had thought one would be a night-time piece.

Of course these educated guesses are never fully realised and circumstance and mood dictate a different path. So it came to pass that this smaller un-painted canvas would be the first of the four to be adorned in paint. May be I felt unable to commit to the bigger piece first off, even after having sketched the view with pastels first off. (Note to self:- Hobbycraft  aerosol can of glue is not the same as fixative #Ididntmeanthatsketchtobeanabstract)

The task was keeping up with the landscape; as this ‘live’ painting sees areas of the scene illuminate then darken within a period of seconds. The weather kept remarkably dry – though the breeze meant clinging onto the easel became a challenge.

Two recently shorn male sheep provided good company in an adjoining enclosure, often communicating in frantic tones to their female counterparts on the hills opposite. Another visitor was a chicken, climbing up the stairs to the deck expecting food as she wandered around my feet. I was surprised by the neatness of her feathers and the various layers therein. – A subject for a future painting me-thinks.