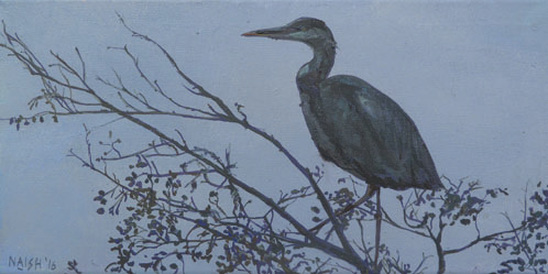 This image had been logged away for some years. Based on a photo taken outside my bedroom window, I loved the graphic nature of the image – almost a silhouette. A pair of herons visited cowslip meadow, Luton on several occasions at that time.

Approaching an Eagle Gallery exhibition with only a single brand new piece, I thought it would be good to have a second. Having not exhibited new work yet this year, due to various other commitments; I felt now was the time. I had a canvas with frame, so it was a case of getting something to fit it. I had originally hoped to do something “in the wild” but with my wife convalescing from an eye operation I used this image and set about turning around the picture in just a few days.

I retained a lot of the original misty murky nature of the dusk image; and supplemented my source material with some googled images of Herons.

I guess this is nothing particularly profound, but hopefully it succeeds as an adequate “filler” piece. Next week we are off to a country cottage in North Wales – maybe there a landscape will be generated.