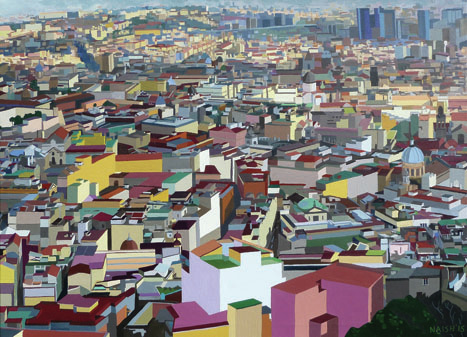 The moment ﻿you think﻿ that a piece is going to be straightforward, alarm bells should ring. In this instance, I thought that my contribution to the Eagle Gallery’s 10th anniversary themed show “Italian Connection” would only take a few days. Find a photo on the computer of a sunlit scene overlooking Naples that had been staring at me from a frame on the kitchen window sill for years: find a suitable canvas and splash some paint around – what could be simpler.

Once I found the photo, it no longer seemed right with its harsh shadows. So, I found a similar shot that had changeable light. I then printed this out but somehow the composition failed compared to how it had appeared on screen.  I ploughed on with this, and then once I’d filled various areas of similar colours, I realised detail and clean shapes were required. After a few days of uncertainty, I settled into a consistent approach framing small areas of the canvas and working up these mini-compositions with my rigger brush.

Several weeks later it was complete.  It was great to have positive feedback during the journey, from either the wife or NaishArt facebook friends. At the Private view of the exhibition, I was lucky enough to sell the piece too.