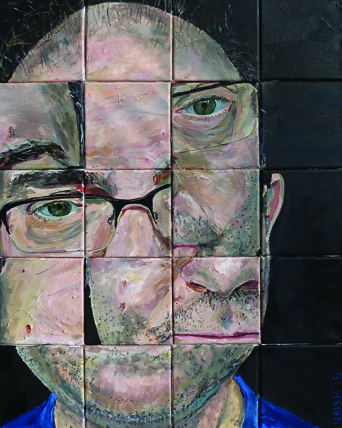 This was an idea I had eating away at me for a long time. Indeed I referred to it back in 2012 in the write up for “I shave in your general direction”. It re-emerged in a bit of a back to front way. I had been considering another yellow flower piece as I had an Ikea frame somewhere so that I could do a sister piece for “We fade to white” from 2013. This time I was going to use square canvases spaced away from each other to create a window like view over said yellow flowers. For some reason the number of canvases fitting in the frame didn’t seem to work, so I brought back the idea of a Chinese puzzle portrait and started collecting 15cm square canvases.

Once I had taken a photograph of myself in an appropriate pose I went about composing it. I did this bearing in mind the join lines between the individual canvases and I avoided eyes straddling any gaps. This was important to make the piece easier to paint. From there I painted the whole as a conventional portrait and finally jiggled up the pieces to create the final arrangement.

I had the original photo segmented in photoshop, so that I could move the pieces around ‘virtually’. This is the second arrangement as originally I had the mouth and below correct with everything else scattered about. This created a line across the middle of the piece that I didn’t like. I finally decided that the principle should be that the edge of the face was retained made up of slightly confused component parts. Some adjacent squares kept their order, so that one can start to read the face when studying different areas of the piece.

It’s a bit strange painting a piece to a standard and then jiggle it about. You certainly start to loose the base emotion in the face. Hopefully you gain enough of interest to justify this destruction.

Could this be transient art? The principle being that the artist returns to the piece every five years and puts it in a different order. The principle of moving shop stock to different locations within a shop is thought to give it renewed energy. Can one do this within a work of art? I’ve not got any intention to pursue this – but it’s an idea!