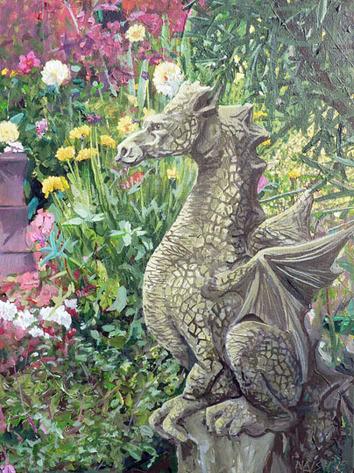 Here is another piece, which I began, in the fresh cool air of Belper in my Uncle’s garden. I liked their dragon statue “Helvard” which stands proudly within the fauna. Much of the piece was completed “live” in the garden itself, and I took copious photos on the expectation of finishing the piece back in my studio in Luton.

It was later completed over Christmas back in Belper. We were staying for Christmas week, and I had two pieces to complete for the January show at the Eagle Gallery. So I set up my “studio” (well an easel and various paints) in the nicely warm summer-house, with the ambition of finishing the piece.

Although not outside with the beastie itself (snow on the ground here on Boxing day!) I did find brief re-viewing the actual colours very handy. My photo reference though printed on quality glossy photo paper had a purple tinge to the stone colour where as in reality it had more a green quality.

The position of the flower heads didn’t quite tally between the photos and my painting from life – this always seems the case – more an issue of seeing in 3d compared to a camera’s viewpoint, than inaccuracy in my interpretation. One compromises between the two changing some but not wholesale to copy the photo.

Feedback from relatives added to the process on this occasion. There was a viewpoint that the dragon had life and the addition of a white dot in the eye socket would enhance this. I had not really been thinking along these lines and assumed that I had been representing stone. I worried slightly that I hadn’t captured the actual scene successfully, but soon embraced the notion that the beastie could be seen in a slightly different way; and so added said highlight.