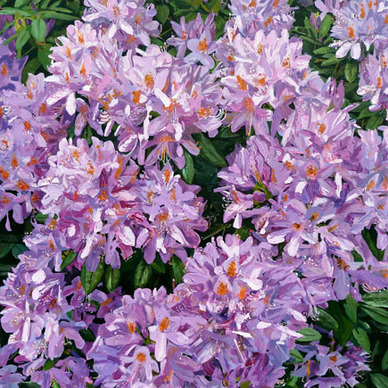 This piece was incredibly quick on the concept side and interminable when it came to physical production. Having taken photos of this full flowering rhododendron bush in my mother’s garden, I thought the images would work as perhaps a new series like the Rudbeckia ones.

There was no build up just “What is the next painting? – Oh yes I’ll do that one – select canvas - compose photo to fit – print out – trace - bosh!” Of course the idea of the simplification that occurred with the Rudbeckia series somewhat clouded my thought process.

I intended a fairly realistic first shot, but I just went to too many mini-canvases. I divided the canvas up into shapes present in the subject and painted them solid colours (not necessarily colours present in the actual subject). This drawing process also simplifies the image into more manageable chunks that can be addressed individually.  I was also part way down the abstracting the image like “Yellow Burst – Six colour remix” but as I over-painted  the realistic layer, I feel  the complicated colour by numbers stage wasted time rather than adding to it at all.

With the complexity of the image, I also had a small 6cm square window to detail the piece in sections. Generally pleased with the result – but my did it take forever!