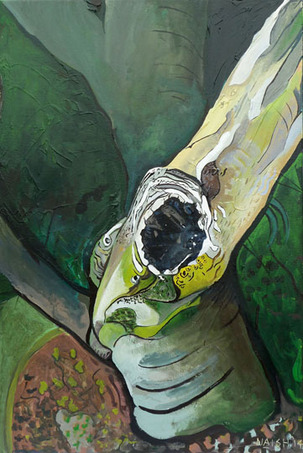 This is a piece working to a brief. The Eagle gallery themed exhibition “Encounters” was to produce a piece of work as a response to (not a copy of) a work by a well-known artist.

The piece had to be accompanied by a small A5 caption giving reason for the piece. What follows is the text thereon.

Apple Tree Form, Andrew Naish, 2014.
Based on Green Tree Form, Graham Sutherland, 1940
“Green Tree Form” is one of Sutherland’s naturalistic
studies, finding aggressive shapes and animalistic
interpretations of felled trees and the like. A large trunk shape fills the centre of the picture left to right with drawn detail of some severed root structure as though a portrait as the centre of attention.

With “Apple Tree Form” I have attempted to use his colour palette and adopted the interest in the grotesque. This apple tree at the bottom my mother’s garden, has had this large black scar of a long removed branch for the forty years that I have known it. I hope that I have seen it at least partially in a ‘Sutherland’ way, interpreting its nightmarish shapes with a certain quality of line and form.

I had to write an essay about Sutherland many moons ago at art college and so his work has been a presence for me, and this exercise allows me gain a deeper understanding of his work

It was an interesting exercise and I think if I had the chance to do it again, I would have gone further afield to find a more aggressive source image. The tree form I used is somehow too benign to fit in with Sutherland’s cannon of miss-shapes and evil forms.

I enjoyed the process though, as I used three pieces of reference material. Firstly, a re-production of Sutherland’s picture – blown up to its approximate size so that I could understand his brush stroke sizes better.  The second was some photographs of the tree I was representing. And finally a pastel sketch I had done of the tree scanned in and framed to the proportions of the canvas that I used. I’d dip in and out of these.

This is not really a painting I would have attempted had I not been asked too, but I’ve certainly learnt a bit about lines in pictures, not detailing the whole image and adding faces etc ‘hidden’ in the piece.