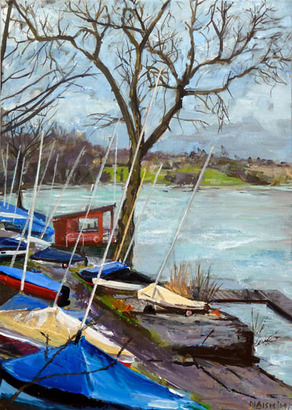 Having finished (pending client approval) the “Wedding” commission, I had a week before the new Eagle Gallery exhibition where I would hope to submit two pieces. I could admit defeat and put in some previous work – only briefly exhibited disused cinema pieces me thinks. Having completed acceptable, indeed saleable work produced in an afternoon on site at Lake Rudyard I felt it not an insurmountable challenge to produce two pieces in the week.

The second of the two was this one ”Winter Boats”. This piece was begun on location at a holiday home where we stayed a week in January 2014. I completed one or two passes on site but it needed neatening and finishing off in the studio. I remember one session where it was getting so dark, I painted some light areas with some light colour on my palette only to discover in the morning these strange areas of yellow that didn’t suit.

As ever the photo reference didn’t quite match what I’d painted, but the only area I modified to any degree was the bottom left hand corner where the boat shapes were more dynamic and interesting than I had managed on site.