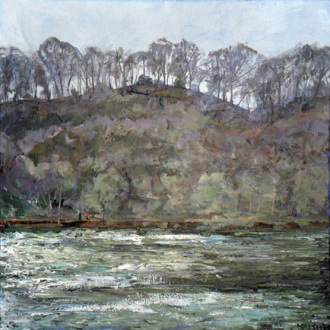 
We spent a week at the end of January 2014 in an English Country Cottage near Leek. We had discovered Lake Rudyard on a previous trip through the area as we found a disused railway on the opposite side of the lake which had a miniature railway running along part of it. My wife discovered “The Boathouse” which was a beautiful new building right on the edge of the lake with beautiful views from the property.

This third piece I had resisted for a while. Although this was the dominant view from the property, I feared it was too flat to be interesting enough. Utilising a canvas pre-painted in “Pacific Blue”, I also re-used my palette from a previous session to kick off with various muddy greys to block in the body of the opposite bank.

Fairly pleased with the afternoon’s work, where I have tried to capture the ethereal mauves of the view. On previous days a train from the miniature railway had been parked up while workers drilled, repairing the line. – They was no sign of this on the day I painted the scene, but numerous people wandered past, so I thought it worth adding some to add interest and scale.