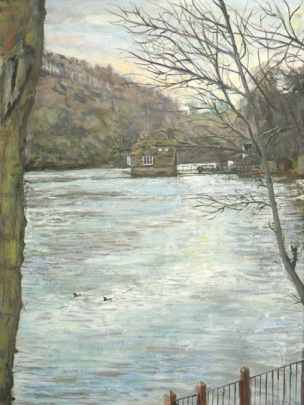 We spent a week at the end of January 2014 in an English Country Cottage near Leek. We had discovered Lake Rudyard on a previous trip through the area as we found a disused railway on the opposite side of the lake which had a miniature railway running along part of it. My wife discovered “The Boathouse” which was a beautiful new building right on the edge of the lake with beautiful views from the property.

This first piece was done from inside the property looking up the lake toward another property that was actually in the lake. My wife discovered it was called “the Lady of the Lake” and so hence the title.

As I was safely installed in the warm, I was able to spend longer on the detail in this one. Never been totally satisfied with the composition, but after working up the building as the subject I feel it improved enough.

The lighting on this view had so many combinations, in morning the sun rose above the distant horizon, adding a yellow glow to the sky. I liked this so much I included a hint of this in the final version (along with the accompanying reflection in the water). Some times everything became very grey; and on other occasions the surface water would flow in the opposite direction to previously. There was never any smoke rising from “the lady of the Lake” but I felt this added some resonance to this winter scene.