44. Down from the Projection Box 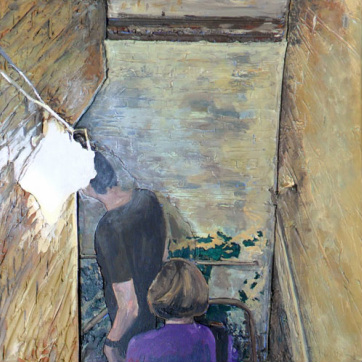 
I had always envisaged “Last Chance for Screen Three” as part of a series of paintings. With the October 2013 one-man show booked in at the Eagle Gallery, I thought that I would have a small bit of wall space dedicated to these texture paintings.

With this in mind a group of four would look good, and so three more were required which I produced concurrently. “ Down from the Projection Box” was the first one completed as well as started.

It was adapted from a grainy i-phone photograph, which I had taken in the remains of the old Odeon cinema in St. Albans. The staircase shown was in a private area which went from the projection box to the stalls area. I liked this image because it depicts somebody apparently well dressed in quite a grubby environment.

I’ve tried to stick with the same language as “Last chance for Screen Three” as in the building itself is textured using modelling compound while the figures and detail are flat canvas. I’ve also used strips of cardboard to define corners and edges and also a small piece of canvas added as a peeling element on the right hand wall.