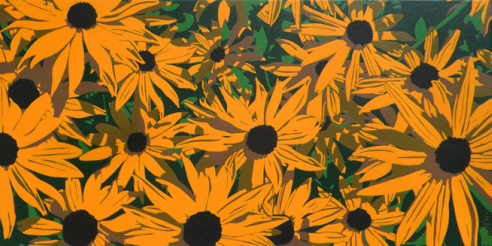 So, this is a return to the abstracted Rudbeckia of “Six colour remix” et al. Having done “We fade to white” I had discovered from re-painting the “pale” version that seeing the original colours in some places at the very edges made it buzz slightly. So I tried it again here – but intentionally. I used a copper for the main yellow with a magenta for one of the shadow area and amongst the other colours, a pale blue for the paler green in the background. I think this technique adds some interest, but not as profound as I had hoped.

I also did this piece in the hope that it would fit well in an existing bronze coloured frame that I had -but unfortunately it did not. The other thing in mind with this piece was possible merchandising in that the format might suit artwork for a mug.