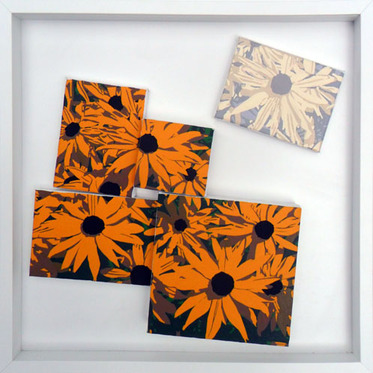 There were a couple of practical reasons behind this piece. I was working on three other new paintings for the Luton Hoo walled Garden 2013 exhibition – 36. “The Garden and Beyond”, 37. “The Empty Birdfeeder” and 39. “Garden Detail” and so had time issues in getting everything finished. This piece could be worked on in evenings. I utilised small canvases which were easy to transport and the simple colour palette was easy to manage on the sofa. Another aspect was to use up some of my small canvases that had never previously seemed right for any project.

I wanted to revisit the “Yellow Burst-Six colour remix” image as this was so popular with my wife. It is also popular with me in that once you have worked out all the shapes and which colour goes where, it becomes a sort of colour by numbers exercise. This process looses all the quite stressful decision making elements one has when normally painting.

It took a while to compose, as I wanted each canvas to look well composed as well as the composition of them in relation to one another also working. Once I had sourced the Ikea frame, this dictated some of the positioning. Early versions had the canvases spread out around the area like a Matisse. My wife felt it made it unclear that they were parts of the same image unless they were closer together. I agreed with this and came up with the one floating away canvas in a paler hue. I like the idea that if you don’t work as a team, your powers are diminished; or if the flower is cut from the stem it fades and dies.

The realisation of the faded canvas was trickier than I had first hoped. Adding 50% white to each of the six colours I had used elsewhere resulted in a still rather warm colour scheme. I mixed the revised colours specially and I was painting this canvas on the day of submission! The piece assembled at work satisfactorily though I have yet to find anyone who actually likes it.