36. The Garden and Beyond 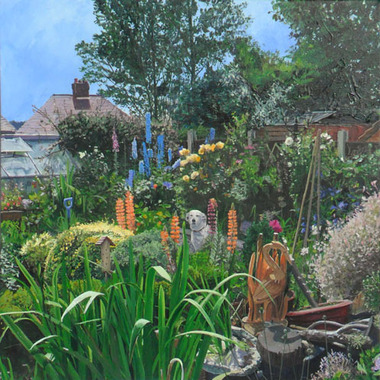 As it was heading into March, it was once again time for the Luton Hoo walled garden exhibition with a possible entry of 5 pictures. I felt that only one of my existing pictures “ View from the Deck” fitted the brief which this year was “The Garden and Beyond”. I’m not sure if this title was aimed at extending the scope of entries to landscapes (which have been commonplace in previous years anyway) but I liked the idea of being quite literal about it. In the case of “View form the Deck”, the scene is looking out over various gardens to the sea beyond.

To start the ball rolling for the new pieces, I held a mini competition with myself. I sourced four deep edged canvases from stock and sifted through some photos my wife and I had taken at a summer party my Uncle and his wife had held. Their Garden was vibrant with life and with a bit of sun I had to be in with a shout of a paintable scene. I did ten A4 sheets each with a photo cropped into the different formats of available canvas. I then submitted this to my wife to choose her favourites. Disappointingly she wasn’t convinced with any of them; but managed to pick 2 that might work. I used these and added back in a third, and for the fifth entry I chose an abstract idea I had using multiple canvases. (“We fade to white”)

Of course the deadline for submitting the title came before I had much paint on canvas. Although “The Empty Birdfeeder” was not finished first, It was nearly there in time for title submission – which meant it had an apt title. Unfortunately the same could not be said for “The Garden and Beyond”. The white dog was  added at a late stage and gave the whole a centre of attention. Although I don’t mind the title, I think the dog needs a mention in it in some way. – “It’s my Garden” perhaps.

Having a balanced composition with the photo, I did minor alterations like to remove some bird feeder poles, and wire border fencing in a couple of places. I lost a tree in the top left corner just to make it slightly simpler, though I am still undecided weather this was correct. The dog was from a Restaurant in Dorking, while the scene as a whole is Belper.

From a ‘get the paint everywhere quickly’ stage, I then was more meticulous working from top to bottom. This seemed a fairly straight forward process and indeed quite absorbing. So much so that I worked to completion rather than working on the other works simultaneously as I have done in the past.