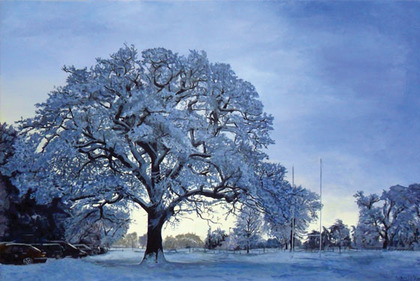 50.8 cm x 76 cm
Interactive Acrylic on deep edged canvas
2012
SOLD
Exhibited at Eagle Gallery Dec members exhibition (10th Dec 2012– 5th Jan 2013)
Exhibited at the Eagle Gallery “The Garden and Beyond” Andrew Naish one man show 12th – 19th October 2013
Exhibited at the Eagle Gallery “Xmas Show” 26th November – 20th December 2018
​
This was almost a self-commission. Tradition dictates that I paint something appropriate for a Christmas card and for a change I was leaving it a little late by taking up the challenge in November. For two years in a row I painted a similar scene based on some photos that my wife took. This year I was wondering weather there was another angle on the same scene, or maybe a pattern based take on the three kings. Stewing in my own indecisiveness, my wife came up trumps once more with a selection of snow scenes from years gone by.

Although very chocolate box, seeing the quality of the photo I knew that the painting would work fine. Perhaps this is a little ‘safe’, and unlikely to achieve great things if there is no danger there, but with a month or so before Christmas; I’m not complaining.

I chose a relatively large canvas that I thought would mean on reduction the result would be even more ‘photographic’. Using such a blue palette was quite interesting, and as ever determining colours in such a tonal photograph was the main aspect where choices had to be made. I was pleased with how the cars turned out, as there isn’t really much going on there, and the colours I invented helped make it look real.

As with many paintings the process of painting itself makes one learn more about the view. Originally I thought that the scene could be anywhere. However, the undulating horizon (golf course), and the rugby club’s posts made it very much Stockwood Park in Luton just off the London Road.

I stopped perhaps a little earlier than I would have done if this had existed just to be a painting. I wanted to do a little more to the snow covered leaf textures; but in reduction this would hardly showed. So I concluded with the brief satisfied.