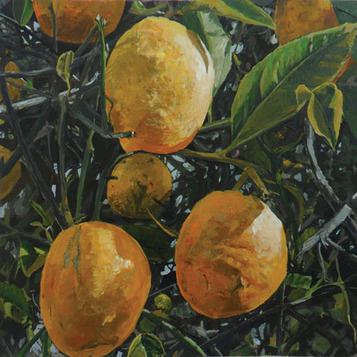 This is the second piece from the New Zealand holiday. I chose the lemon tree in my parent-in-law’s garden as it was a particularly unfamiliar site for me, and something not available at home. So I sketched an area of the tree to work out a composition and then moved quite quickly went to canvas. I spent several days painting from life (with sun shade and sunscreen as appropriate), but some of the colouring and detailing wasn’t quite right. I took some photos of the tree so that I could continue the piece back in the studio in the UK.

The photos were taken at a slightly brighter moment than the original sitting, and despite my best efforts, the composition had differences too. This ‘problem’ became quite liberating, as I combined elements from the original and the reference photo. At a stage I felt was complete and my creative director (the wife) agreed, I looked to framing. Deciding on a bronze finish tray framed I then painted the sides to be a continuation of the front as the frame would reveal 4mm of the sides and the 7mm gap a little more.