28. Time for the Olympics 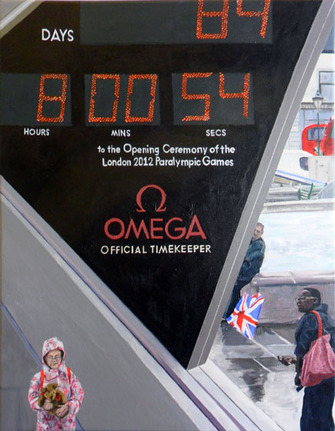 Having recently joined the Eagle Gallery in Bedford, I now needed to produce monthly work for the exhibition schedule. Somehow this made me feel I should create something of the moment; painted now for exhibiting now and about now. So I thought the Olympics would make a good subject matter. I knew of the clock in Trafalgar Square and thought that there would be a picture in there somewhere. Maybe a wide view with people rushing about beneath, as though they did not have time for the Olympics.

Of course when you get there it is about something different, and when you study the numerous photos you have taken, it is about something different again. I went there in early June 2012, and the queen’s diamond jubilee celebrations had just concluded the previous day – this explains the stacked fencing in the background. It periodically rained but was briefly sunny too – typical London weather. Several shots had potential, but I plumped for this one. I liked the strong shapes and also reflections in the glazed sign-board which had dancing children and a distorted façade of the National Gallery. Ironically, the reflection was lost from the final version in the name of simplicity. The lady on the right and the girl on the left were from different photos but were needed for compositional reasons. The head of the man leaning on the fountain wall is from elsewhere too, as the hooded figure needed involvement in the piece.

It was interesting seeing people use the clock. In essence, it’s a tourist attraction to have your photo taken next to. Kids would be lined up on the ledge and photos would be taken, everyone politely awaiting their turn among the general hubbub of the square. In a way this usage is not greatly about the Olympics in the same way people having their photo taken outside the houses of parliament that is not about politics. I like the story side of the image, a child is more interested in her teddy bear than being overlooked by an Olympic sponsorship logo.

The clock is certainly a massive structure, and will leave tourists with a record of by exactly how long they missed the Games. Countdowns usually lead to something, I can’t help but think Trafalgar square itself might be empty when the clock reaches zero, certainly events elsewhere will be more important. I wonder if another painting of the clock reaching nought would be interesting – it sort of misses the point if you know what I mean.