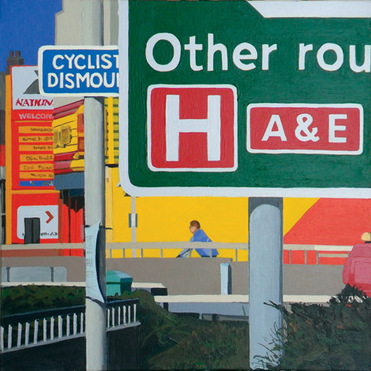 It was serendipity all the way with this one. Telford Way in Luton was closed for demolition of an old railway bridge for eventual replacement with a nice bright blue bridge for the new guided bus-way, and I couldn’t resist a look with camera in hand. I took numerous photos of all the drilling, bashing etc. I love the marvellous parade of bright cones organising the road navigation. This temporary and fleeting appearance has its own unique beauty I find. Two photos included this image, though I failed to notice it at the time. I was actually photographing more cones and “Telford Way Closed, follow diversion” type signs, as well as a car trying to gain access to this road or the (still open) car park was in communication with a Day-Glo jacketed individual.

Amongst my numerous photos I must have caught something worthy of being the basis of a painting, and there it was hidden away in the very corner of this scene. A co-alignment of various verticals and horizontals, with warm and cheery colours on what was an early sunny day. There in the middle of it all a figure, perfectly framed by these lines pushing a pram through this urban jungle.

The photo was of such an enlargement, that the image was getting a bit fuzzy. I used this vagueness as a spur to rationalise coloured areas to their predominant colour. I returned to the principles of “Yellow Burst – Six Colour Remix”, though I felt it needed to give more detail to some areas. Using simple straight colours is also a good way to learn more about what one’s paints do. I now have a better awareness of the difference between cadmium red medium and cadmium red light.

I made a few distinct changes from the photo. Firstly the foliage should be a few tones lighter, but painted this way helps balance the large green sign. The sky was not really this blue (is it ever) and there was a division line through the “other routes” typography where two metal sheets were slightly out of alignment – I felt this didn’t really add to the story.

Titling this picture proved a pain, I was keen on “Luton in Bloom” but the wife was not so sure. I wasn’t keen on titles with the word ‘signage’ in but we found agreement in using some of the words written in the painting. If I do more of this type of thing – an “Urban Chic” exhibition if you like the pictures can be called “Other routes”, “Cyclists Dismount” and the like. “’H’ is for Hospital” is suitably functional. I feel a title trying to add to the pictures message is unnecessary. This image is an aesthetic exercise and you should make of it what you will from just looking at it.