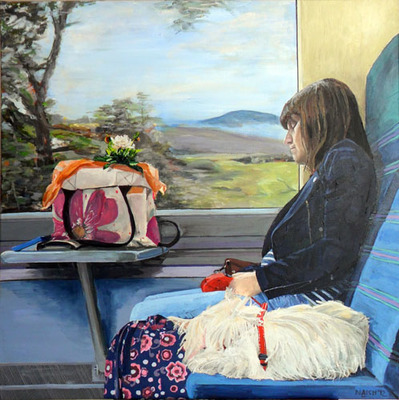 I enjoyed this painting, and it is my first to be exhibited at the Eagle Gallery in Bedford. This was for an exhibition with the theme “Journeys”, and so I worked on  some ideas. Firstly there was the bend in the road as seen from an upstairs window at my mother’s home in Potters Bar. This had copious school children making their way home through the rain and various vehicles traversing this route too; with lights glowing on the wet road. I took a series of i-phone photos that I thought I could piece together the most interesting elements (pink umbrella wielding schoolboy being a must). I wasn’t convinced that this really fitted the brief even though they are on a journey through both life and to get home. Another idea was a flat view of bus at a bus stop with Potters Bar Railway Station in the background. I may return to these ideas in the future.

Suddenly the photo this painting is based on appeared on my computer screen as I was working on the ideas mentioned above. I instantly realised this one fitted the bill. This photo had slipped my mind and was taken during a train trip from London to Luton. I had taken it to show my wife this adorably cute, well-behaved and attentive dog. By the time I had got out my ‘phone to take a clandestine snap, the dog had his head down. Still, I texted it anyway and thought no more about it. In the context of a journey, it gains new meaning and leaves some unanswered questions about the individuals involved. The lady possesses quite a bulky suitcase, yet has a potted plant in her hand luggage (I substituted a flowering plant rather than the actual foliage she was transporting). Why?

It was a bright sunny day, so the window was just a white rectangle – Everything had a fairly even lighting though there were some strong shadows due to the sun coming through the opposite window. I extended the image as the i-phone failed to catch everything of the scene. I even researched the carriage design on the internet to make sure I could make the window this tall (which surprisingly I could). I also needed to see how the seat finished off as this was missing in the photo.

I found the lady, the bag, the flower and the dog interesting. The picture out the window was from a completely different train journey, but I felt this adds some more interest and a focus on what they might be dreaming about. Perhaps a realistic version of this window would have numerous reflections from things inside the carriage, but I think the “dream” aspect is reason for slight abstraction.

Like most pictures, perfection is not achieved, but I feel the interest is there for the piece to be deemed a success. I hope that you agree.