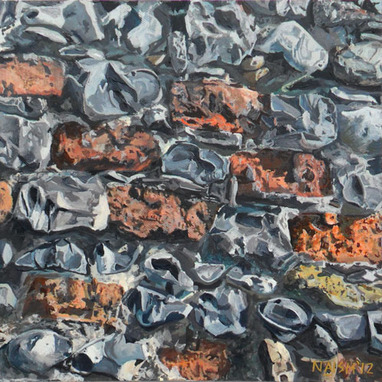 This is the second piece painted especially for the Hertford Open 2012 exhibition. Returning to the notion that a 300mm square canvas would be quicker than anything else this was a deep edged canvas ensuring no need for framing.

Of course it actually takes just as long as a bigger piece, because of the detail required as I assume that people peer closer at these canvases.

This was from the first tour around Hertford and within the same grounds as the man on a bridge. It is based on a photo of a larger area of wall nicely side lit. The initial decision to make is how to crop the image. I have gone smaller than life size with hopefully enough bricks to make an interesting composition. Like the “Yellow Burst” picture before, I used the actual surrounding image folded down onto the sides. The crop was such that the top was  not available so I had to make this up. With time constraints I did not do the final detail layer to the sides. This nominally blurry/ unfinished effect is fine as a framing devise.

With time diminishing rapidly I spent two evenings at home on this – thankfully its small size makes it very transportable and paintable in a more cramped environment. Alas, it was not accepted at the Herford Open and my mother actively dislikes it – so real confidence boost there.

Still one has to plough on.