23. A Sunny Day in Hertford 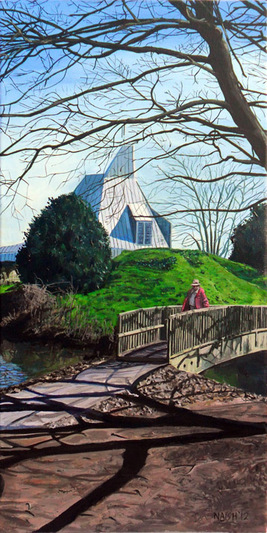 This painting took a while to evolve into its final form. It was originally an idea of my Mother’s to paint a scene of Hertford for entering into the Herford Open exhibition. Great idea I thought and I went with my wife and wandered around Hertford taking photos. I had received some 30cm x 40 cm canvases from my antipodean relatives, and thought I could use this format for one or more pictures. Indeed I got as far as selecting some images and printing out the pictures ready to begin. Once I was sat down and ready to start, I felt something wasn’t quite right. The chosen images had issues I was not 100% happy with, and I didn’t feel confident enough to radically alter the compositions or make bits up, so I returned to Hertford with camera in hand to get some further visual reference.

The bridge in the final version had also figured in one of the original compositions. This time, I viewed it from the opposite bank of the river. The rear of the theatre building provides interest on the Horizon, an ancient mott adds shape and the dramatic shadows of the tree with the tree branches themselves help to frame the composition. I had recently bought the canvas with no specific usage in mind solely as I liked its proportions.  It suited the vertical stacking of elements and so I used it for this painting.

I tried to be quick at the ‘photo-shoot’ itself as I was somewhat wary of numerous people enjoying the spring sunshine. I did manage to catch a couple crossing the bridge, and I took three shots of them. This gave me enough reference material to be able to rearrange the poses and positions along the bridge back at base. I eventually substituted the figures completely with a single figure walking toward camera rather than away. He was a fellow I’d caught on my phone camera in Potters Bar sometime previous. It can get a little trixy here because light sources don’t always match, and I think the man was from the height of summer rather than sunny day in early spring – and so his clothing might not be totally correct. Viewers new to the piece are better judges than me as to weather this stands out or not. I kept the red colour of the coat from the original photo and the rest of the image is fairly much as photographed.

As a by-product of this exercise, I have a fair amount of possible compositions that I can now log away and resurrect when they seem appropriate. For an arguably straightforward composition, much development work was required.