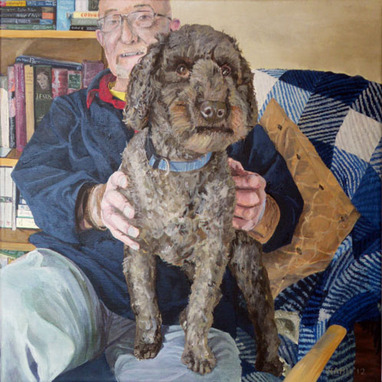 
Bailey was the problem dog. Quieter than the other two he was less easy to represent. None of the photos really stood out for me; so we returned to deepest and darkest Belper for a photo-shoot. Out of the masses of photos taken (thank the lord for digital camera technology) one seemed to work. To get Bailey central in the image, I needed to add more width to the right. Thankfully a similar photo had more of the chair that I could paste in. I’m pleased there had to be some manipulation, as this sort of justifies doing a painting and not just printing out the photo.

To see the dog’s eyes is an achievement in itself, and the shapes around the two heads I find appealing. Although staged, the heads at different angles adds a certain naturalness. Bailey is clearly centre stage and provides us with a portrait of a dog in his environment.