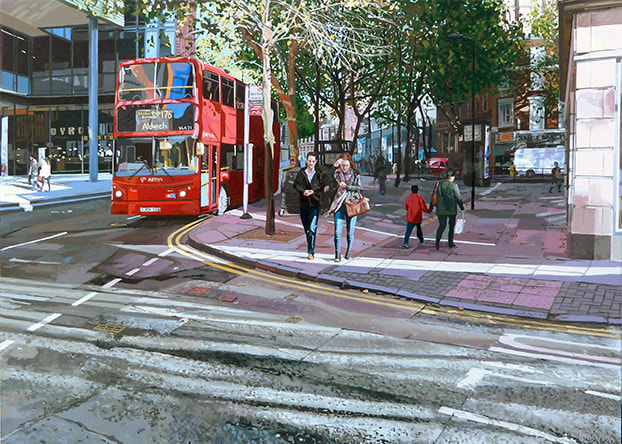 Here’s a painting that’s been in “Development Hell” for a while now. It was first planned as one of the pieces for the 2015 “Urban and Rural” exhibition. Having selected too many images to paint it lay unappreciated in a folder on my computer for a long time.

Revisiting old ideas and with the appropriate canvas and frame awaiting in the loft I felt it time to revisit whilst in “Lockdown”.

I had only casually composed the piece, and went through quite a bit of trauma juggling the elements of the image from the various photos I had rapidly taken “ninja style” in London when visiting it anew. For some reason figures came and went ‘till I paired it back to almost a single unaltered photo. At one time, I had a figure front left to lead you into the piece but he was in essence a large dark uninteresting blob which obscured the road textures which fascinated me. The two figures in the middle always felt a little too large – not helped by the petite Chinese lady and child walking away nearby. Consulting the photograph they originally resided in reassured me that they weren’t too far off the mark and so I proceeded.

This took a while starting with blocks of colour to define all the shapes and then only after refining and neatening did I proceed to add detail to the piece. It continued fairly much to match the manipulated photograph with the odd minor amendments. These include deletion of a cctv camera top right leading out of the composition (If I were Banksy I would have redirected it toward the viewer and added another six!) and also a bicycle propped against the railings in the background on the right-hand side. A figure immediately behind the cheerful approaching couple lacked direction and also bit the dust.

I find this image quite dramatic, with both a bright and cheerful aspect alongside the Urban decay of a battered road surface.

Well it took quite a while. I hope that there is something in there for you.