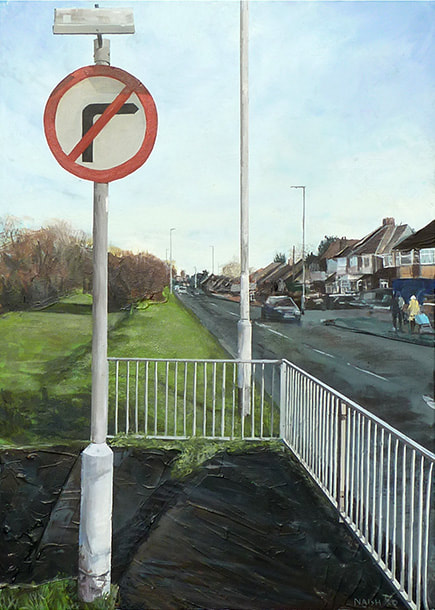 Exhibited at members' show, Eagle Gallery , 30 July - 26 September 2020.
​
The Eagle Gallery has two themed exhibitions a year. The first of 2020 was to be “Schism”; a word I had to look up in a dictionary to get its full meaning if I’m honest. So:- “noun – a split or division between strongly opposed sections or parties, caused by differences in opinion or belief.” My thoughts immediately drifted towards Brexit, the catalyst for “division, split, rift, breach, rapture, break and separation” as the dictionary goes on to define.

Quite independently, I had been periodically photographing a no right turn sign on the Icknield Way in Luton which appealed to me. Something on the walk between home and the local Beefeater. For some reason, I titled this view “Brexit and all that” well before any paint had left the tube. So, when this themed exhibition was announced, my plans started to form.

The image itself interested me for its vertical lines, urban paraphernalia and a hint of greenery. Traditionally, a line cutting the composition into two is a bit of a compositional no-no. However, I feel that I get away with this because the line is slightly off-centre and alongside the signage pole frames the road going into the distance.

As for the Brexit sub-text, I hope this piece will appeal to all sides of the argument. The no right turn sign could be a suggestion not to enter the iteration of the country depicted to the right of the post as opposed to the greener environment you are at present in. A gloomy post – Brexit scenario if you like. A leaver might see this painting as showing Luton unchanged following the process as in “What was all the fuss about”. When it first came into my head, I felt this piece was about Brexit, but was unsure in what way. A traffic management sign is erected for the drivers own good, to avoid chaos and danger or does it block self-determination?

I’m not sure if I have achieved an image that can be championed by all sides, and that my personal strong thoughts on the matter have not blead through, but hopefully it’s a starting point for civilised debate.