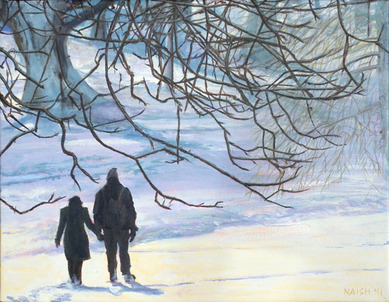 So this is the third Luton snow scene. I was quite pleased with the two previous attempts, but wanted something slightly more graphic. I think detail gets lost when reproduced card size, so something obvious is the best. So here are some people, some snow and tree branches.

I used the same photo-shoot of snow in Wardown Park as the previous two years. In this instance, its almost a close up of the previous year’s shot. It is a different photo however.