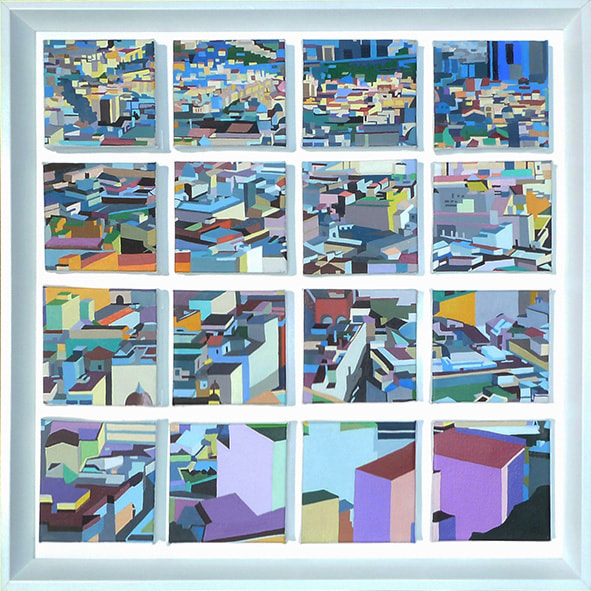 A return to my most successful painting: “Cacophony”. The first iteration of this piece dates back to 2015 when it sold at the private view for “The Italian Connection” themed show at the Eagle Gallery. Picking up a commission at this event for a 75% sized copy, “Cacophony – Once Removed” was born. Though the commission fell through (it was now 2018) the piece sold in the private view of that year’s Hertford Open.

Cacophony Divided stemmed from the wish to represent this style of work at my one man show at the Eagle Gallery in May 2019. I’d already had the idea of a grid of 10cm square canvases within an Ikea frame in a similar vein to 2013’s “We Fade to White”. I’d got as far as composing the work with a floral image – but felt it uninspiring and lacking any reason to portray the subject in this way. With the one-man show looming I wanted to add an evening shift to up my productivity. I needed something small enough to be do-able in front of the television alongside the wife. Each 10cm panel could be painted separately and without causing mess in the living room. The idea to combine “Cacophony” into this format was born.

Once the work had begun it struck me that the divided aspect also represented how people can live in larger towns without much awareness of neighbouring areas and people. Each segment part of a greater whole but self-contained.

Very pleased with the result as it works for me on these different levels, and is interesting to look at.