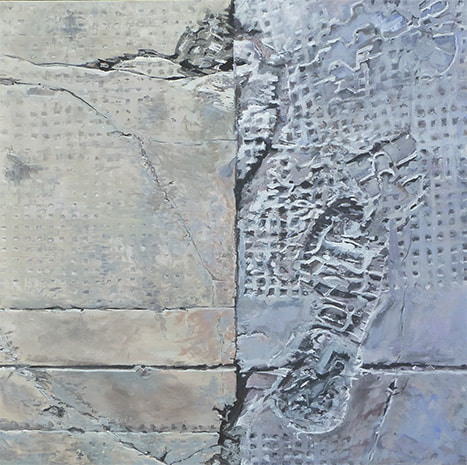 This piece has been on the back burner for over a year. I had taken a photo which I liked under a major road bridge going over the river in the centre of Glasgow. Road textures and shapes attract me and I’m sure that I will return to this subject in the future.

I had a few photos, so I narrowed it down to one, and chose a canvas that enabled the shoe print to be near enough life size. From there I chose to keep the vertical dividing line to be plum in the centre and then moved the image about until I was happy with the composition.

I initially blocked in basic colour areas then took to painting each half separately at 90 degrees to the final orientation. This allowed me to work on the edges of the deep edged canvas without having to rotate the image.

I completed the fawn coloured side first before detailing the right-hand side. This seemed to work using different colour palettes for each. Unifying the image proved tricky however, with the too blue and dark side needing modification to bring it into the same universe as the left-hand side.

Of course, when to finish is the issue with this sort of painting. I could carry on ad infinitum perfecting every detail making it photo realistic. My photo origination had been slightly blurry and so I had to interpret rather than just copy at some point. Perhaps some parts look slightly laboured and basic in the final piece, but this is a painting and I think it is sometimes important to see that. Besides the depiction is of something imperfect in itself.

As to the story of the image, it can be about what you fancy: The grungy urban environment: People misbehaving; councils repairing things with something not much better than the original; My own social phobias (looking down to avoid interacting with the greater environment); or even just an abstract pattern of grey shapes.