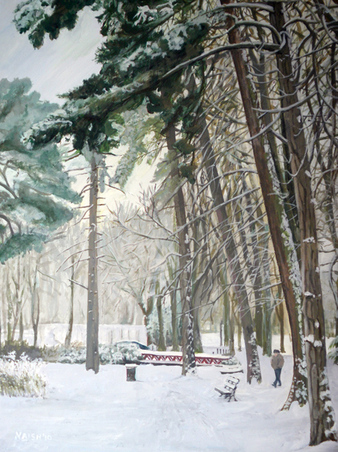 This painting was commenced having not painted on canvas for a while. Back in the saddle after years in the ‘wilderness’, my process was a little confused and I was somewhat slow in achieving this work. Self ‘briefing’ helped to at least give me some direction. What was this brief? Well quite simply, paint something to go on a Christmas card and to achieve this by the Christmas post deadlines.

The solution was to use one of my wife’s quality photos of a winter scene in our locality. She has a fixation with snow and so we have endless shots of snow. I chose this image as I liked the composition but added a figure from another photo to give scale and increase the sense of cold.

Some elements could have been better. I think I left it too late to work on the foreground snow, for example. It had remained whiter during the rendering of the other areas and at that point felt quite alive. Making this greyer seemed to affect the balance even if it was truer to the photo.

The distinction between foreground tree and the one immediately behind proved tricky too. Without more photographic reference the high contrasts in the photo made it difficult to gage colour and detail in the non-white areas. Not working from life or having experienced the moment in taking the photo oneself means too much was “made up” and so the end result looses reality. I did succeed in getting paint on canvas and a card in the post; so this is a start of sorts.